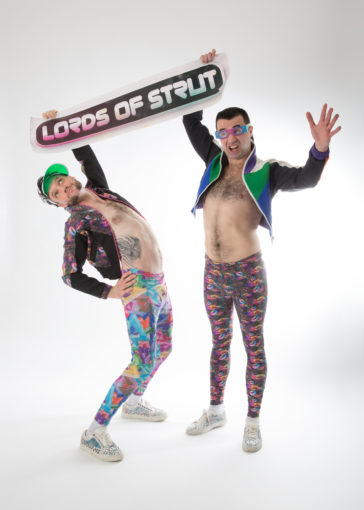 LORDS OF STRUT – Stars of BRITIANS GOT TALENT, RIOT and WINNERS of the STREET PERFORMERS WORLD CHAMPIONSHIP!

The funniest show you will see this year!

THE STREET is suitable for almost any environment – performed mostly at festivals as an out door show.
For technical and booking information email booking@lordsofstrut.com

Lords of Strut are an Irish comedy double act, with a nod to the classics and a lot of now. Combining character comedy, dance, and acrobatics. They mostly play the characters of Famous Seamus and Sean-tastic, two brothers who delusionally believe they were made for fame. They have been touring globally since 2011 performing at festivals across Europe, Canada, Australia and New Zealand, they are a favorite at Glastonbury festival and in 2017 have been on such TV shows as Britains Got Talent and The Late Late Show.

Back to Shows
“AN HOUR OF BELLY LAUGHS”
IRISH TIMES
“A hilarious performance... Funny and brilliantly choreographed”
THREE WEEKS EDINBURGH
“If Michael Flatley and Jim Carey had a sado-masochistic love child they would be it”
Eile Magazine